“What the hell, guy”

“First you do a music review with a contrived bit at the end to make it look vaguely food related, then, for a supposed “Glasgow” blog, you go and review somewhere I’m never gonna go about 430 miles away????”

Oh, yeah, sorry about that.

Let me explain. This is indeed a kebab shop in Croydon, but they are also part of a chain of kebab shops, and Glasgow is going to get one at some point. It says so on their website! Look!

It doesn’t say where in Glasgow right enough, but I imagine it’ll be in the City Centre – probably West Nile Street, as that seems to be kebab central at the moment.

According to their website, they started out in the Deutschland back in 1989 and now have over 60 stores worldwide, with plans to open hundreds more in the coming years. They also say that they sit somewhere in between a regular kebab shop and a gourmet kebab restaurant, which is probably sensible in the ever-crowded grilled and sliced meat market.

The kebab itself was quite pleasant. Here’s a photo: 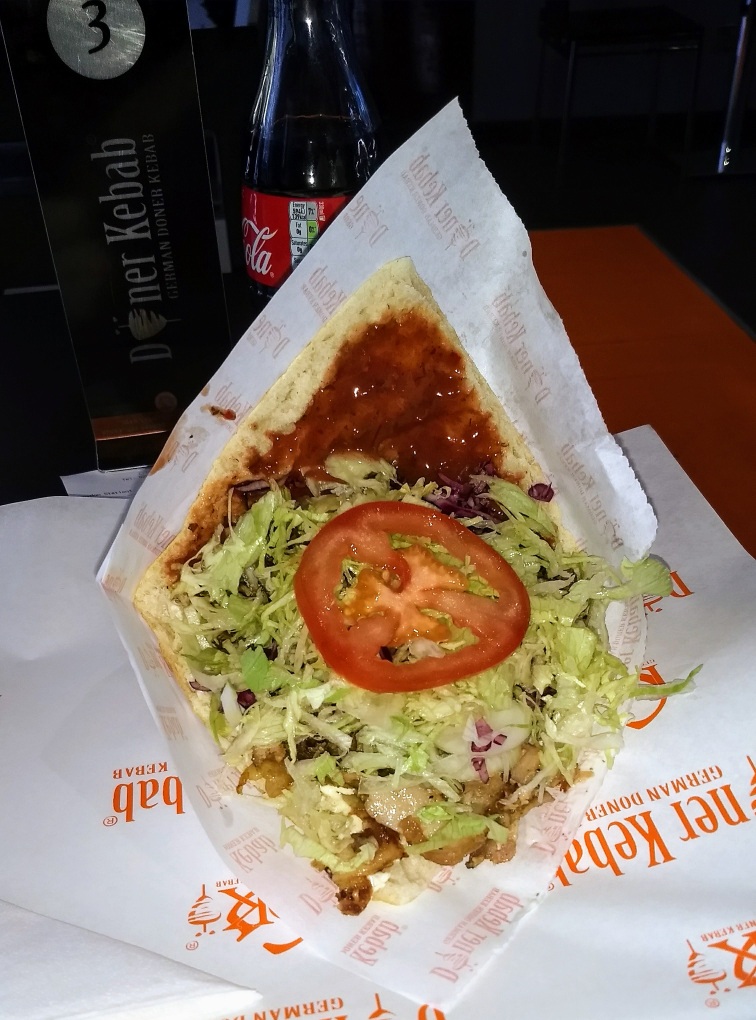 The bread it comes in is unusual – it’s essentially a pitta bread in essence, except it’s crunchy, very thin and looks a bit like a waffle. Didn’t manage to grab a photo, so this is off their website:

You get the idea.

But it works – it’s robust enough to hold the meat, salad and sauces (plural, more on that in a moment), and it’s thin, so what you taste is the kebab and not the bread. As for the meat – it was alright. I’ve had far worse kebabs, but it was a little saltier than I would have liked. Also, rather than lamb, their red meat offering is beef, which could well work – I, however, opted for the chicken.

The kebabs, according to the website, come with three(!) sauces, spicy, garlic and yoghurt – and as you can see from the photo above the spicy is on one side, the garlic on the other. I didn’t notice any yoghurt sauce but this may have been mixed with the garlic – but it was very good! The spicy sauce had a kick to it and was quite sweet, like a spicy ketchup, the garlic sauce was a good cooling counter, and worked well with the chicken. The salad/meat ratio was also bang on, though the solitary slice of tomato in the centre of the diamond just looks weird, truth be told.

All in all, perfectly pleasant, a little bit expensive (£4.99 for that and a small bottle of Coke), and will no doubt be a very welcome addition to the Glasgow kebab scene – hurry up, please.

“Why were you in Croydon anyway?”

Ahh, I was actually there for football reasons. Wanted to see if I could see that most elusive thing in professional football, a Palace win.

Edit: Originally 8/10 for the expense but then I remembered I was technically in London, and also remembered an awful kebab I had at the top of Surrey Street years ago that was a similar price…