In a recent discussion with a vegan about this very blog, he was very complimentary about the writing (yeah, it’s alright, I guess, but won’t win any awards or nothing) but lamented the fact that, as things had to die in the making of the foods that I eat and then loosely write about, he could never sample the foods for himself.

WELL GUESS WHAT, JAKE? THIS ONE’S FOR YOU BUDDY!

More and more people are eating vegan food these days, for a variety of reasons – some for ethical reasons, others for health reasons. Me? Curiosity mainly. When I was younger, I didn’t eat meat and there were a whole load of vegetarian meat substitutes that I really enjoyed – I think from 16 to 18 I basically lived off Morning Star Streaky Strips (sadly no longer available) which I ate in faux bacon sandwiches (far too many) – so I know that vegetarian alternatives can be good – but what about vegan ones? I haven’t eaten a load of vegan stuff, I will admit – mainly because the stuff I’d had in the past had been fairly ropey. However, a lot of stuff has changed, it’s 2018, we’ve got Heston Blumental, Brexit and Playstation 4’s – so maybe vegan stuff is good now.

The Glasvegan is a vegan takeaway in the centre of town – it’s name “The Glasvegan” being a fairly straight forward pun, but why not? It’s a pun that cannot be used anywhere else, because only people of Glasgow have the suffix “-wegian” on their denonym. Will we ever see the Leicsvegan? NO! That wouldn’t make any sense! The West Bromwivegan? Absolutely not. No, the only people that could nick this pun are from Norway – and a cursory glance at google tells me there is a place in Olso with that name. Bugger.

Anyway, The Glasvegan do a range of vegan food and drink, and it won’t come as a surprise as to what I went for: The Doner Vebab. Vebab – a contraction of “Vegan” and “kebab”! This pun doesn’t work so well for me – I’d have gone with “Voner” but there we go.

Having placed my order, it was cooked in about 3 minutes and took two people to prepare – one cooking the vebab pieces on a grill, and the other preparing the wrap, which consisted of a tortilla wrap and a lot of vegetables. Lets have a look:

It’s almost as if they knew I was coming – it’s been put in the sandwich press!

Here we see the innards – the garlic sauce (no yoghurt or mayo, but however it was made, it was actually really good), lettuce, onions, grated carrot, and the vebab itself – made, I am told, from seitan – a wheat protein-based meat alternative. I must say, I was very impressed with the look of the vebab pieces – they had been cut thickly and thinly in different places to mirror the appearance of doner meat, the colour was spot on, and the texture was very meaty, though I will say it was much chewier than a meat kebab. Flavourwise, nothing like kebab meat, though it was very peppery and a little bit smoky so enjoyable all the same. Was a little disappointed that the ratio was a little salad heavy -and the hot sauce barely registered on the palate, but overall it was actually pretty good. It was, however, missing one crucial ingredient, which I believe is vegan friendly – no tomatoes! 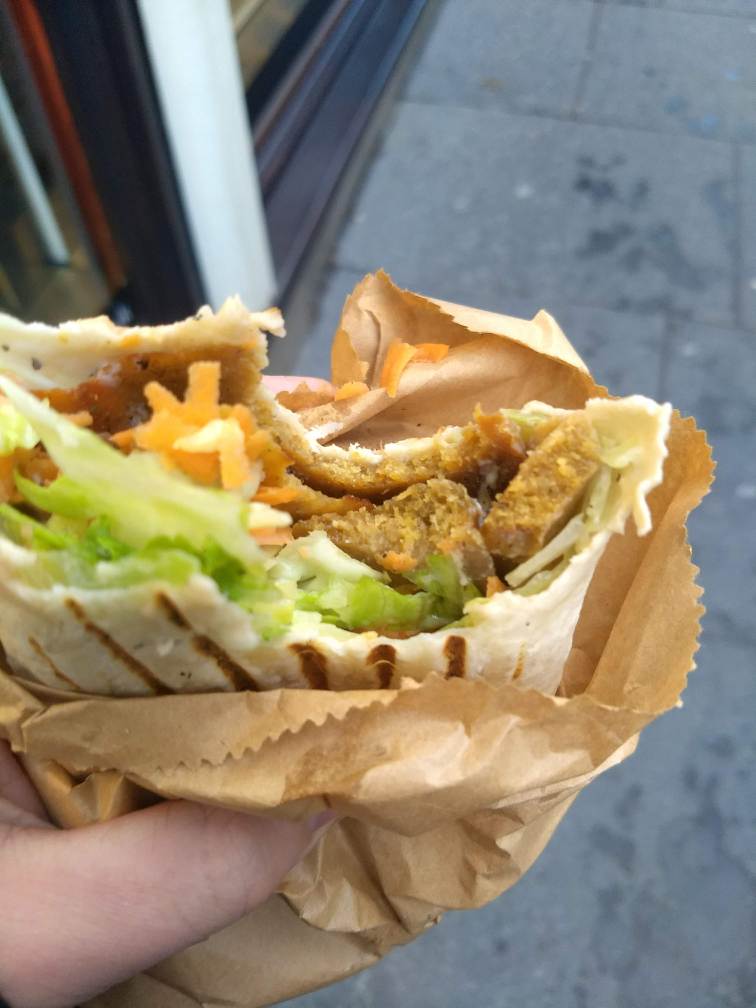 All in all, a pleasant change.

Will it get me to give up meat again? No – but I can be persuaded to eat less of it, and more of these.

Overall, I’m giving this 8 out of 10 – only issues here were the bread (a vegan nan or similar would have made this so much better) and the lack of tomatoes. Would highly recommend you try it!