Hello once again dear reader. How are you doing? Not a rhetorical question by the way, feel free to leave your answers in the comments. Me? I’m just dandy, thanks for asking.

Now, late last year I posted a short piece about this place having eaten there the night before opening, but was short on going into any great detail. There were three principle reasons for this:

Now, I don’t have any moral scruples against reviewing a complementary meal per se, but I do feel awkward for some reason – and that reason is that it makes it look like shawarmapolice.com lacks integrity. Just so we’re clear, I am a big fan of free stuff, but not to the point where it affects the review. After all, had my previous trip been bad, the expectation would have been that I give a good review because, well, I didn’t pay for it.

Likewise, had the visit been good, I would have struggled to convey the message that good review was good because the food was good, and not because it was free. 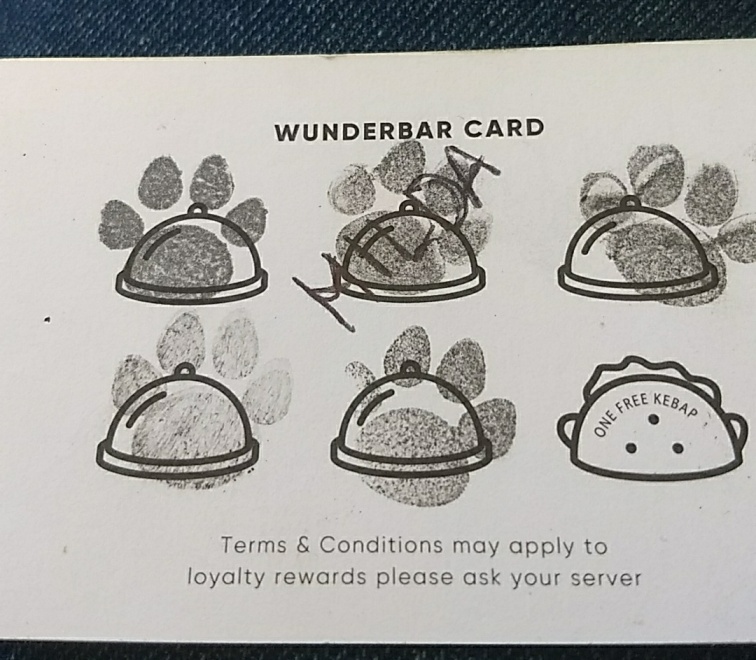 So, today I’m reviewing a freebie.

This is different. See that reward card immediately to the north of this sentence you’re reading? That’s a fully legit, five paid-for kebabs equals free kebab freebie. A freebie that has cost me somewhere in the region of £80 over the last few months (factoring in drinks and tips, natch). This is a freebie I’ve more than paid for. This is a reward. This is like cashing in your Nectar points for GIN. (which reminds me, next time I’m in Sainsbury’s…)

So why do I keep going back? Behold this magnificent beast. 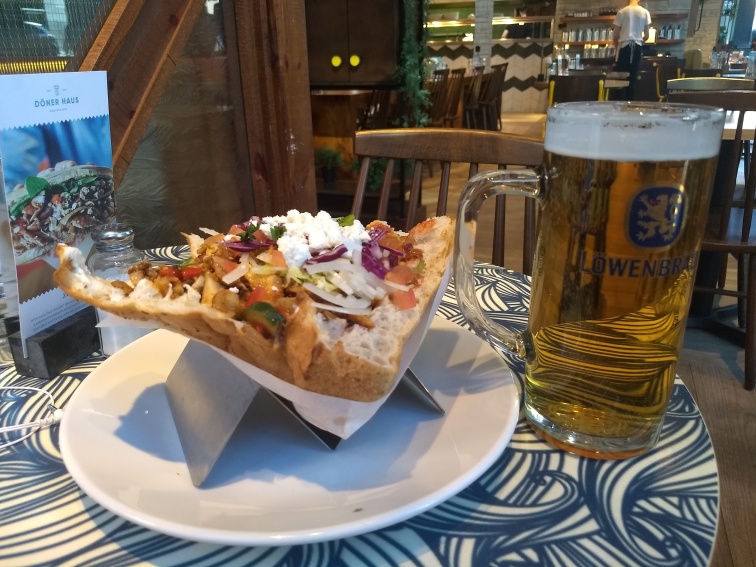 This, ladies, gentlemen and non-binaries, is why. “The Mustafa” and a pint of Lowenbrau, and I’m not even that big a fan of German lager.

The Mustafa, according to the menu, is “Chicken schwarma (sic) with mixed salad and chargrilled vegetables (courgette onion and peppers), mint, coriander and harissa seasoning. Served in a pida with both chilli and garlic sauce and topped with feta cheese”. Döner Haus offer a choice of bread, so I went for the crispier, thinnier, biggier, and downright more diamondier bread, the fladenbröt.

As you can see from the photos, I got some bonus bread on this visit – the left hand side is a little bit lopsided. However, it is to the “west” of the kebab, and forms a “wing” of sorts, so maybe this was a bizarre visual pun for a kebab fit for a President?

It was awesome. The chicken shawarma was better than I remember from previous visits; having spoken to co-owner Sanj on the night before opening night, he did say that they have an eye for continuous improvement but I’d say they’ve got it right at the moment. The meat is well marinaded and cut from an open skewer which is both neatly hidden from view for the casual diner and fully in view for the hardened kebab coinoisseur. The meat is the right consistency – similar to the “pulled” meats that have been popular for the last however long – tender, not tough, but likewise not purée. The salad I don’t think could have been any fresher unless I was prepared to stand in the field where it was grown, and the feta cheese was a great garnish. The thing that I continually forget is quite how thick the fladenbröt actually is – as you can see, towards the base it’s actually quite substantial; I always think of the Döner Haus breads as being similar to pizza bases, the pide being the “deep pan” to the “thin crust” of the fladenbröt but perhaps not… What I’m trying to say is, it’s deceptively filling. This isn’t a bad thing… Means I save on dessert, I guess!

The restaurant itself deserves a mention at this point. Table service without any pretentions; it is what it is, and equally accommodating for solo diners looking for a quick lunch as it is larger groups looking for a larger meal.

Normally this would have been about £13 all in + tip, but thanks to the previously mentioned buy five, get your sixth free deal, I got change from a fiver for a beer and a kebab (though I did leave a larger tip than usual)

Sit-In only I think? (I’ve never asked for a takeaway – will get back to you on this)

One thought on “Döner Haus, Glasgow”