It’s a tough opener. I can’t very well mention a trip to London without nicking the iconic opening to Dangermouse, nor can I improve upon it, so I’ll just leave that there and move on.

LONDON. London’s great, innit? OK, I know it gets a bad press from people who aren’t from there, but I have done extensive studies* and I have found this to be because of several factors – a dislike of lampposts, that bad series of the Bill where Barry Grant from Brookside turned up and formed an unlikely partnership with Reg “Reggie Baby” Hollis, that entirely unnecessary u-bend in the Thames, London, Danny Baker, and a perceived media and economic bias towards the nations capital at the expense of other cities, regions and the home nations.

This not withstanding, there are plenty of good things in London, and Borough Market is no exception. Its undergone a bit of a renaissance over the last few years – thanks to the rise of the internet, hipsterism, craft moustaches and ironic jumpers, it is now one of the go to places of a Saturday morning to get brunch.

“But wait Will, don’t you live in Glasgow”

“Why yes Narrative Guy, I certainly do.”

“So you went all the way to LONDON just to get BREAKFAST?”

Well, there was a bit more to it than that in actuality. The tragic events of early June made me quite angry that a bunch of arseholes had gone about my home patch on a murder spree, and at the same time saddened me to think that I hadn’t visited for some time. This kinda focused the mind a little bit, and on a whim I jumped on a sleeper train to London Euston one Friday night, and off I went. 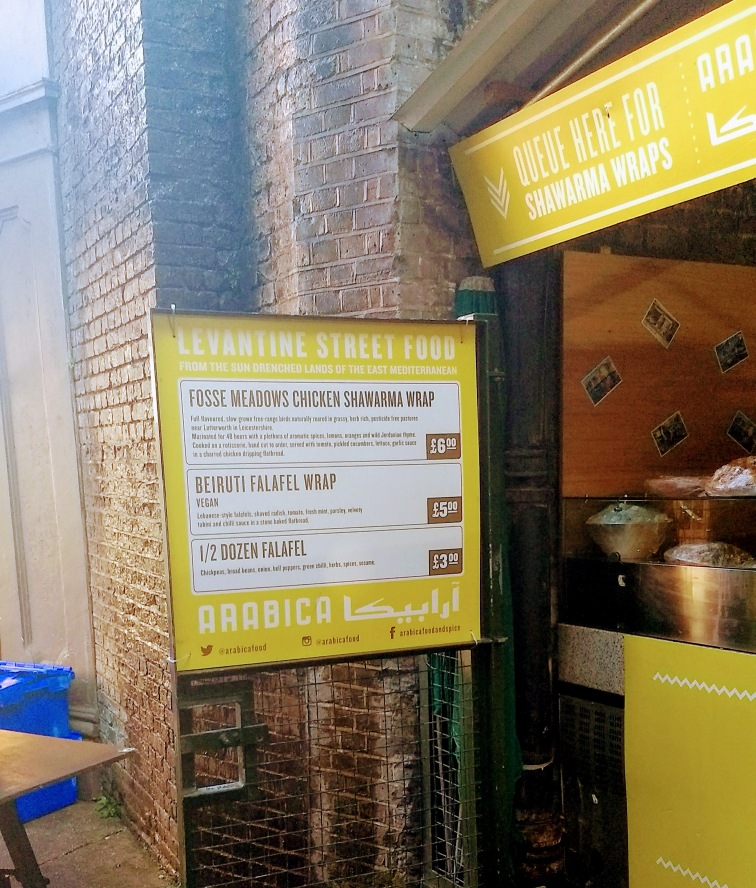 Now, it’s worth pointing out that I could have eaten almost anything for breakfast. When I arrived at 12pm after a few hours “fannying about”, the market was in full swing, and it was like one of those World Buffet style places, except it wasn’t awful. There was Egyptian food, Indian street food, hog roasts, Caribbean, good old fashioned barbeques, and of course, the shawarma. It won’t surprise anyone to hear that I went for the latter.

At £6, it’s more than I would usually pay but hey, that’s lahndaaan innit. Was it any good? Why, yes it was. They made a marketing point about the chicken being from Fosse Meadows – is that a good thing? Tasty is what it was – well marinated, succulent, juicy and fully of clucky flavour. The kebab guy wasn’t taking any chances with the flatbread though – he dipped it in the chicken fat and seemed to hold it against the grill for ages. I was pleasantly surprised when it didn’t combust, and even more so when it didn’t taste of burnt toast.

There it is. What a magnificent bastard that was. The sauce was also spot here – the creamy garlic combining nicely with the selection of Leventine pickles and fancy chicken to create a lovely morning snack. Was it perfect? No. The portion size was relatively small compared with the wraps you get in Glasgow, and price was relatively large. The elephant in the room here – the unnecessary chilli – I’ll let it go this time, for two reasons – one, the guy asked me if I wanted one, but in my half awake daze I said “yes” when what I meant to say was “absolutely fucking not” – but also two – look! It’s like a mobile phone aerial from back in the days when mobile phones had aerials, buttons, and made phone calls! In a way, this kebab could prove to be an ingenius tool for awkward social situations – get stuck in a boring conversation? Simply hold this up to your ear at talk you an imaginary buddy!

Anyway, I’ve said a lot – the upshot is that this is very good and should you end up in Borough Market, pay ’em a visit. Other shout outs – the Market Porter, which is scientifically** proven to be the best pub around, a big thanks to the girl in Costa at Borough Market who gave me a free double espresso shot after taking pity on my overnight rail trip, and to the weird Tesco employee who shouted at me for having the audacity to approach a checkout to pay for goods… yeah.