It’s been a while – won’t bore you with the details, but I’m back with another one of these so-called reviews. It’ll probably be quite short this one, as I find my ability to write cogently impaired by last night’s decision experiment with Southern Comfort and Tizer as a mixer. Surprisingly pleasant! However, my head feels like it’s about to fall off.

As such, there’s no real story here to detail why I ended up here. I woke up, realised I was hungry, and that something had to be done. Chillies I ended up at by mistake – I had happened to walk past, at which point my inner monologue said “Oh yeah, that’s a thing. Let’s do that thing. The kebab thing”. So I did.

I have only been to Chillies once before, and I gotta tell you, dear reader, I loved it. In a time where most kebabs were decidedly ropey in this part of the world, Chillies stood out as a superior product. Trouble is, until today, I never went back, and I cant work out quite why. A place I’ve always rated, and this is (from memory) only my second visit?

Ow! My head. Southern Comfort and Tizer?? What was I thinking??? God this stings.

So, idly walking by, as I said earlier, I went in. Such was my head, I needed something substantial, so I ordered a regular mixed kebab. This is what you get:

(the salad and sauce came separately for some reason)

The positives: see that chicken? For my money, that’s the best chicken shish in town. I will know for next time just to get that, because it was immense. It seemed to be oh god it’s like someone’s stabbing me in the back of the eyeballs marinaded in a lemon and coriander mix, and lightly cooked (but not undercooked), the result being a remarkably soft bit of chicken.

The lamb shish was tougher, a lot tougher, but was marinated in and covered with a hot sauce which frankly should have been the sauce on the whole of the kebab. Great stuff!

On the flip side, the doner meat was disappointing, the seekh kebab didn’t have any noticeable seasoning (it tasted like a long beefburger), and the portion was way too small. To put it into perspective, Istanbul’s regular kebab costs (as of my last visit) £5.50 and looks like this: 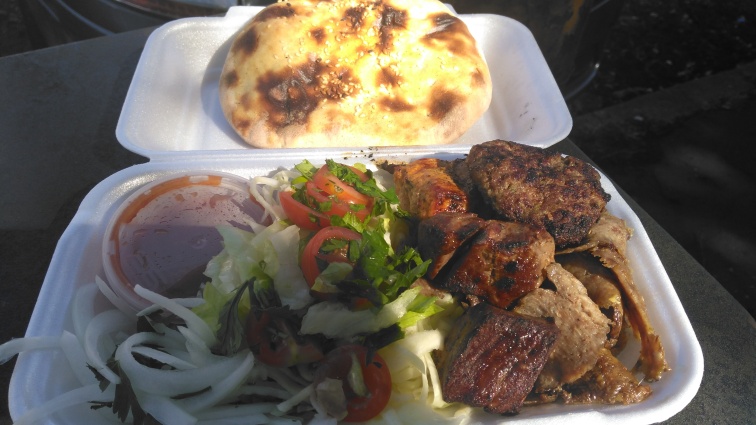 As I said earlier, I had struggled to understand why I’ve not been back in ten years – and I can only think that somewhere at the back of my mind, I’d realised that it just wasn’t value for money. The same is true today: the food varies from very good to meh, but the price isn’t one worth paying. The guy who served me added insult to injury by charging £8 (i.e. rounded up the £7.95) which means the score will need to reflect this…